Mixed May for Markets

Equity markets started off strong in May, but volatility later in the month led to a partial pullback. The early gains brought the S&P 500 and Dow Jones Industrial Average (DJIA) to all-time highs. The Nasdaq Composite suffered from additional volatility due to its heavy technology weighting. The S&P 500 gained 0.70 percent, and the DJIA saw a 2.21 percent return. The Nasdaq Composite fell by 1.44 percent.

Markets were supported by improved fundamentals during the month. According to Bloomberg Intelligence, as of May 21 with 95 percent of companies having reported, the first-quarter earnings growth rate for the S&P 500 stands at 53.1 percent. This strong result is better than analyst estimates for a more modest 23.9 percent growth rate.

Markets were also supported by technical factors during the month. All three major U.S. indices remained above their respective 200-day moving averages. This marks 11 consecutive months where the indices have finished above trend.

The story was much the same internationally. The MSCI EAFE Index gained 3.26 percent during the month. The MSCI Emerging Markets Index saw a 2.34 percent gain. Both international indices have finished above their respective 200-day moving averages for seven straight months.

May saw further progress in containing the spread of COVID-19. Daily new case counts finished the month at levels not seen since last summer. There were similar improvements in the number of hospitalizations and deaths. Much of this progress can be traced back to continued vaccination efforts. We finished the month with more than 40 percent of the population fully vaccinated and more than 50 percent having received at least one shot. While the continued increase is encouraging, the pace of vaccinations has slowed. With that said, the continued improvement showed that the long-term trends remain positive.

The economic data releases in May largely pointed toward continued growth, but there were some signs of a slowdown in the data. April’s job report was a prime example. The 266,000 jobs added during the month were a noted step down from the 770,000 jobs added in March. Consumer confidence and spending remained near post-pandemic highs. Personal spending increased by 0.5 percent in April, following an upwardly revised 4.7 percent stimulus-fueled surge in March.

Business confidence and spending also showed signs of continued growth. The Institute for Supply Management Composite index fell from 63.8 in March to 62.5 in April. But even so, this result left the index at its second-highest level on record. Businesses also continued to spend during the month, with core durable goods orders rising by more than expected. As you can see in Figure 1, core durable goods orders have rebounded well past pre-pandemic levels. 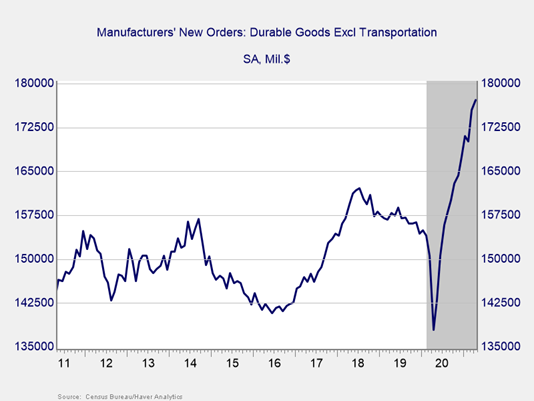 The housing market also continued to grow during the month. Low supply of homes for sale and rising prices served as a headwind for faster sales growth, however. Sales of existing homes fell by 2.7 percent in April. On a year-over-year basis, sales of existing homes were up by 33.9 percent.

We continued to make progress on the economic and public health fronts during the month, but the pace of recovery is uncertain, which may lead to market volatility. A well-diversified portfolio that matches investor goals and timelines remains the best path forward for most investors. If you have concerns, contact your advisor to review your financial plan.