A positive quarter for markets, despite choppy September

Markets dropped early in September before partially recovering throughout the rest of the month. The S&P 500 fell by 3.80 percent during the month, while the Dow Jones Industrial Average (DJIA) lost 2.18 percent and the Nasdaq Composite declined by 5.10 percent. Despite a disappointing September, all three indices ended the quarter in positive territory. The S&P 500 gained 8.93 percent in the third quarter, and the DJIA managed an 8.22 percent gain. The Nasdaq, with its large weighting toward technology, led the way with an 11.24 percent increase.

Technical factors were also supportive during the month. All three major indices remained above their respective 200-day moving averages throughout September. This is the third straight month where the indices finished above trend. The 200-day moving average is a widely followed technical signal. Sustained breaks above or below this trend line can signal a change in investor sentiment for an index. While the continued technical support was welcome, the volatility during the month brought the indices closer to their respective trend lines. Another month of declines could cause one or more of the indices to fall below trend.

The story was much the same internationally, with a disappointing September capping off an otherwise positive quarter. The MSCI EAFE Index fell by 2.60 percent during the month but gained 4.80 percent for the quarter. The MSCI Emerging Markets Index declined by 1.58 percent for the month, but on a quarterly basis, it gained 9.70 percent. Technicals were supportive for international equities. Both indices spent the month above their respective 200-day moving averages.

Fixed income markets were down slightly in September, as rates increased modestly. The Bloomberg Barclays U.S. Aggregate Bond Index lost 0.05 percent, but on a quarterly basis, it gained 0.62 percent. Interest rates ended the quarter largely unchanged, with the 10-year Treasury yield starting and ending the period at 0.69 percent.

The public health situation in the U.S. was mixed during the month and quarter. We saw a notable rise in case growth in July, but we were able to make progress in reducing local outbreaks in August and early September. More recently, however, the data has started to show some concerning signs. Although the national case growth rate finished the quarter below July’s highs, we did see an uptick in case growth toward the end of September.

The increase in cases has been gradual, but it signals that coronavirus risks may continue to rise as we head into the fall. The back-to-school season and recent Labor Day gatherings look to have had a negative effect on public health. This may drive case growth in the short term due to the lag between infection and detection.

Testing showed progress during the month. The average number of tests increased, although daily test counts were volatile. The positive test rate fell in September and ended the quarter below the World Health Organization’s recommended 5 percent level.

While September showed some progress on the public health front, there are signs that risks may be rising again. Public health data should continue to be vigilantly monitored as we work to keep the pandemic under control at a national level.

We saw continued evidence of economic recovery in September, but the pace of improvement slowed throughout the quarter. Despite a strong rebound in spending earlier in the summer, the data releases in September showed a slowdown in growth. Personal spending, for example, grew by 1 percent in August after rising by 1.5 percent in July and 6.5 percent in June. Looking forward, continued moderate growth remains likely.

One area where we saw notable improvement during the month was consumer confidence, which came in much better than expected. The Conference Board Consumer Confidence Index had its largest monthly increase in more than 17 years, bringing the index to its highest level since the start of the pandemic. As you can see in Figure 1, there is still a long way to go to get back to pre-pandemic levels. But after a disappointing July and August, this is certainly a step in the right direction. 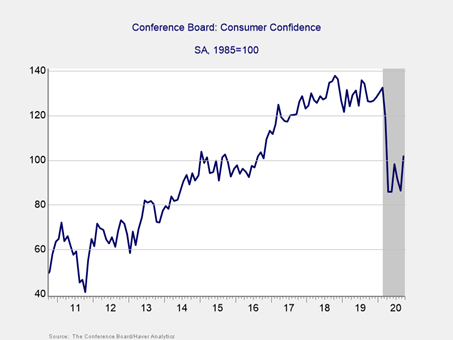 Consumer confidence was supported by continued improvements in the job market during the quarter. More than 3.1 million jobs were added in July and August, bringing the total to more than 10.6 million additional jobs since reopening efforts began. There is still a long way to go to get back to pre-pandemic employment levels, but the continued positive progress during the quarter was encouraging for consumers.

Businesses also showed continued growth during the month, albeit at a slower rate. Business confidence, as measured by the Institute for Supply Management Composite index, declined slightly in August but remained in expansionary territory and above where the index closed in February. Durable goods orders and industrial production both increased but at a slower pace than earlier in the summer. It will be important to continue to monitor business confidence and spending as we head into the fall.

One bright spot in the recent recovery has been the housing sector, which experienced an impressive rebound over the summer. New and existing home sales both hit their highest rate since 2006 in August, due to a surge in prospective homebuyers encouraged by record-low mortgage rates. Home builders have noticed this increased demand and ramped up construction accordingly. With rates remaining near record lows in September and home builder confidence at all-time highs, the housing sector is poised for growth heading into the fourth quarter.

Recovery continues, but risks are rising

Rising coronavirus case counts and state-level outbreaks need to be monitored, but the pandemic remains under control. Fears of consumers derailing the economic recovery have been eased by the improvement in confidence and spending, but the slowdown in growth overall is a concern. And the shaky markets we saw at the start of the month, along with the continuing medical and economic risks, means more volatility is very possible. On top of all of this, we also need to consider political risks. With the pending presidential election, economic and market disruptions are even more likely. Outside the U.S., the China trade conflict is coming back into focus, and the Brexit saga is likely to worsen as well. That said, fundamentally, conditions remain favorable as we enter the fourth quarter.

Given these uncertain times, maintaining a well-diversified portfolio that matches investor goals and timelines is the best path forward for most investors. As always, if concerns remain, you should contact your financial advisor to review your plans.